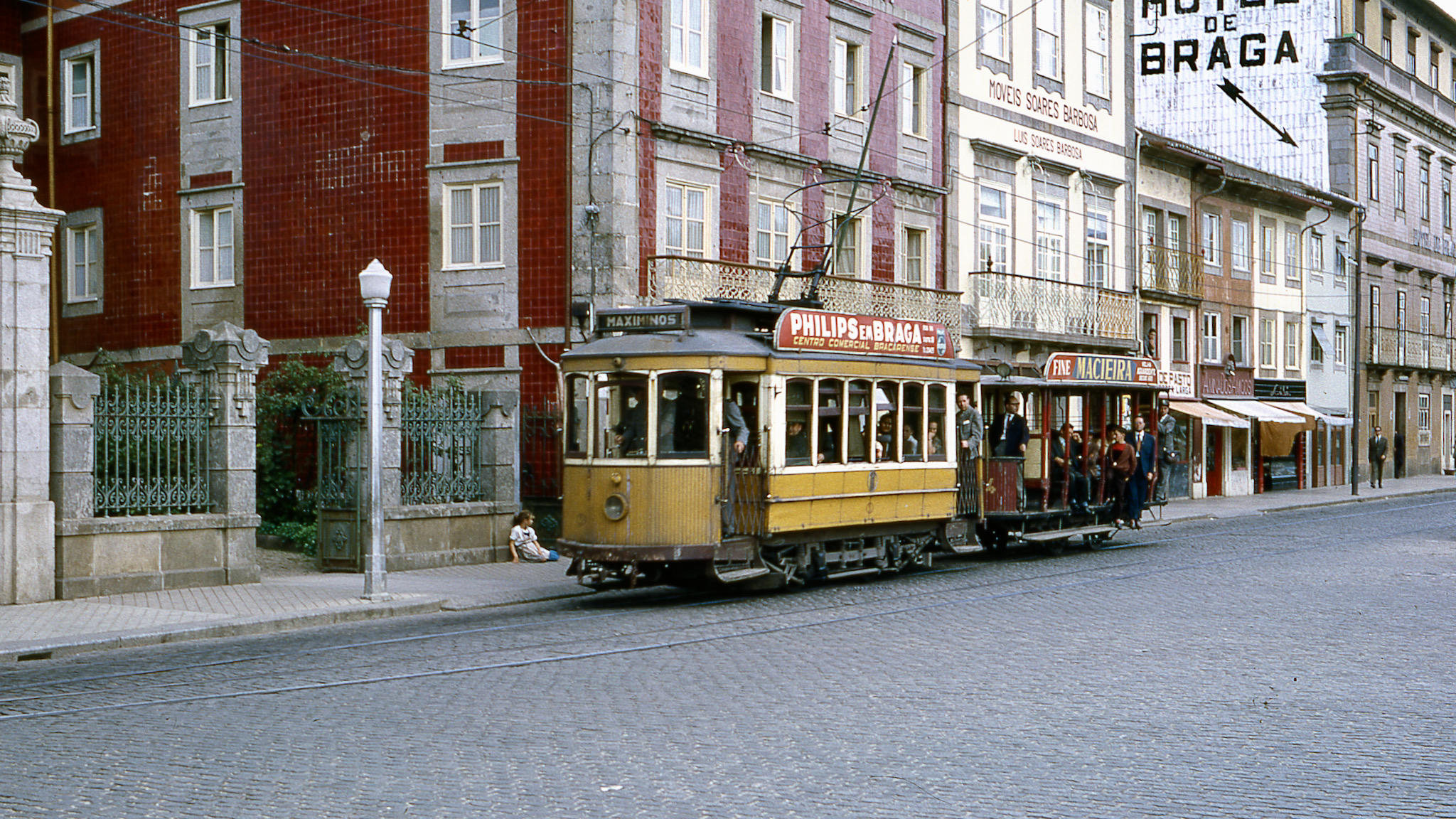 Braga is situated about 55 km north-east from Porto. It’s a very old city, with its roots in the pre-historic period. Apart from the many monuments in the city itself, one of the most important destinations for visitors is the Santuário do Bom Jesus do Monte, a pilgrimage church situated on a hill about 5 km east of the city. The railway from Porto to Braga had opened on 21 May 1875 with the station at the west of the city. 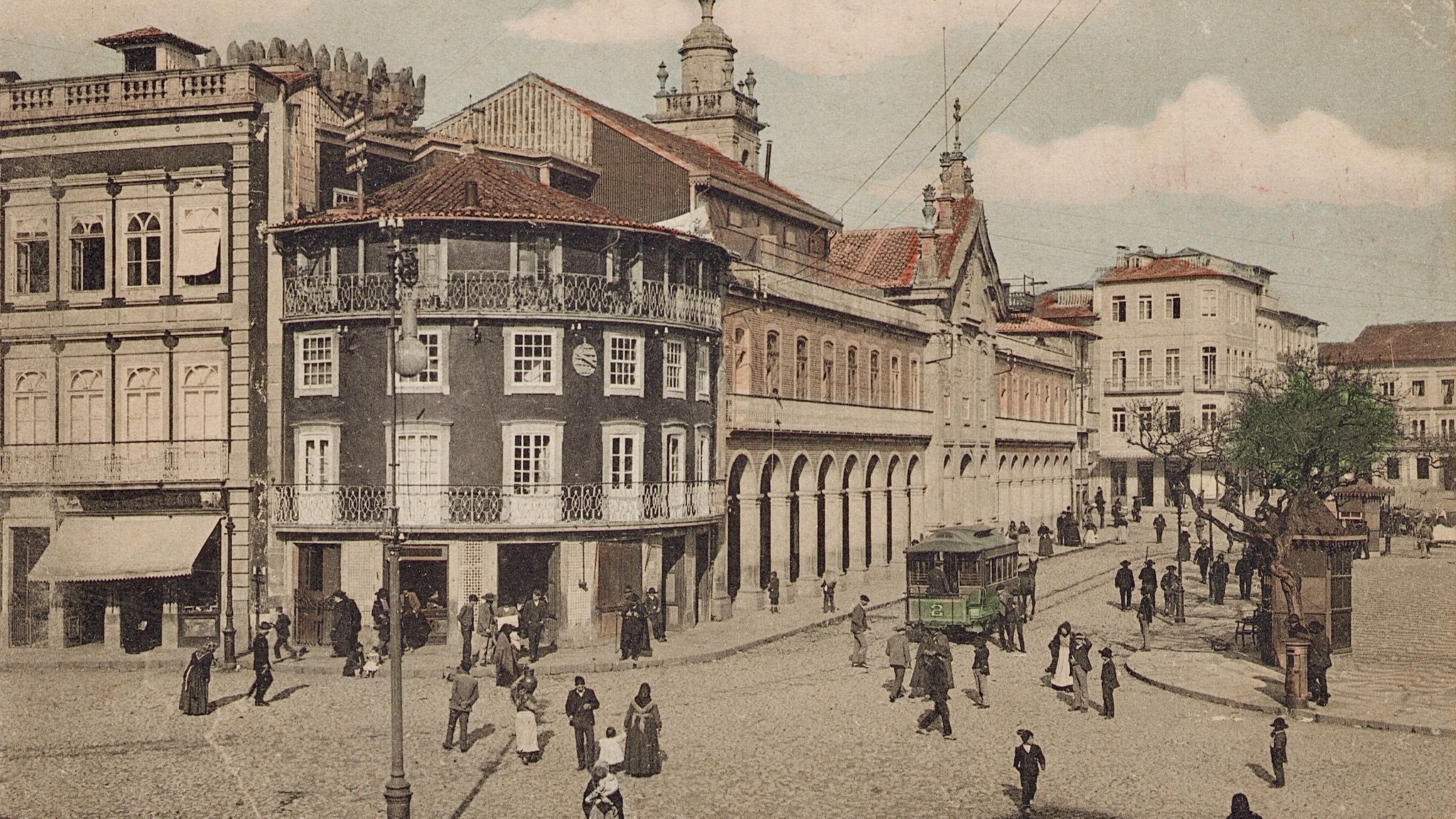 Mule tram no.2 in front of the Arcada

On 26 March 1882 a standard-gauge funicular was opened up the hill alongside the stairway to the Bom Jesus church. The funicular has two parallel tracks and was constructed by Niklaus Riggenbach. With a length of 270 metres and a maximum gradient of 52%, this was the first funicular in Portugal and one of the oldest still existing in the world. It relies on the weight of the water ballast for motive power, and on a central Riggenbach ladder rack for braking. In 1967 the funicular was handed over to the Confraria do Bom Jesus, a religious organisation. It still uses the original cars and the water counter-balance system.

In June 1883 the tramway and funicular operators merged into the Companhia Carris e Ascensor do Bom Jesus. Two months before, in April 1883 two small steam locomotives were bought second hand from the since 1880 defunct Régua – Vila Real 900 mm gauge tramway. They were built in 1877 by SLM Winterthur with the works numbers 112 and 113. The locomotives had worked in Tras-os-Montes as a pair, coupled together by a load-carrying framework. The steam engines were in Braga mainly used on Sundays and holidays. At less busy times the service was provided by single cars hauled by mules.

In 1886 a second, more northern tram route was opened between Largo de São Francisco and the railway station. This route was via Rua dos Capelistas, Campo da Vinha (nowadays Praça do Conde de Agrolongo) and Rua dos Biscanhois where it joined the first route again just West of the Porta Nova. This route might have been made to ban the steam trams from the busy but narrow Rua do Souto.

In 1887 a third steam locomotive was acquired. Of the origin it’s only known that it came from Germany.

After several serious accidents the locomotives were since 8 July 1891 only allowed to be used between Ponte de Santa Cruz (Peões) and Bom Jesus. Only mules were allowed to haul the trams in the urban area. As there are photos made after 1891 showing the locomotives on the Avenida Central and near the church of São Vitor, this restriction was lifted again. 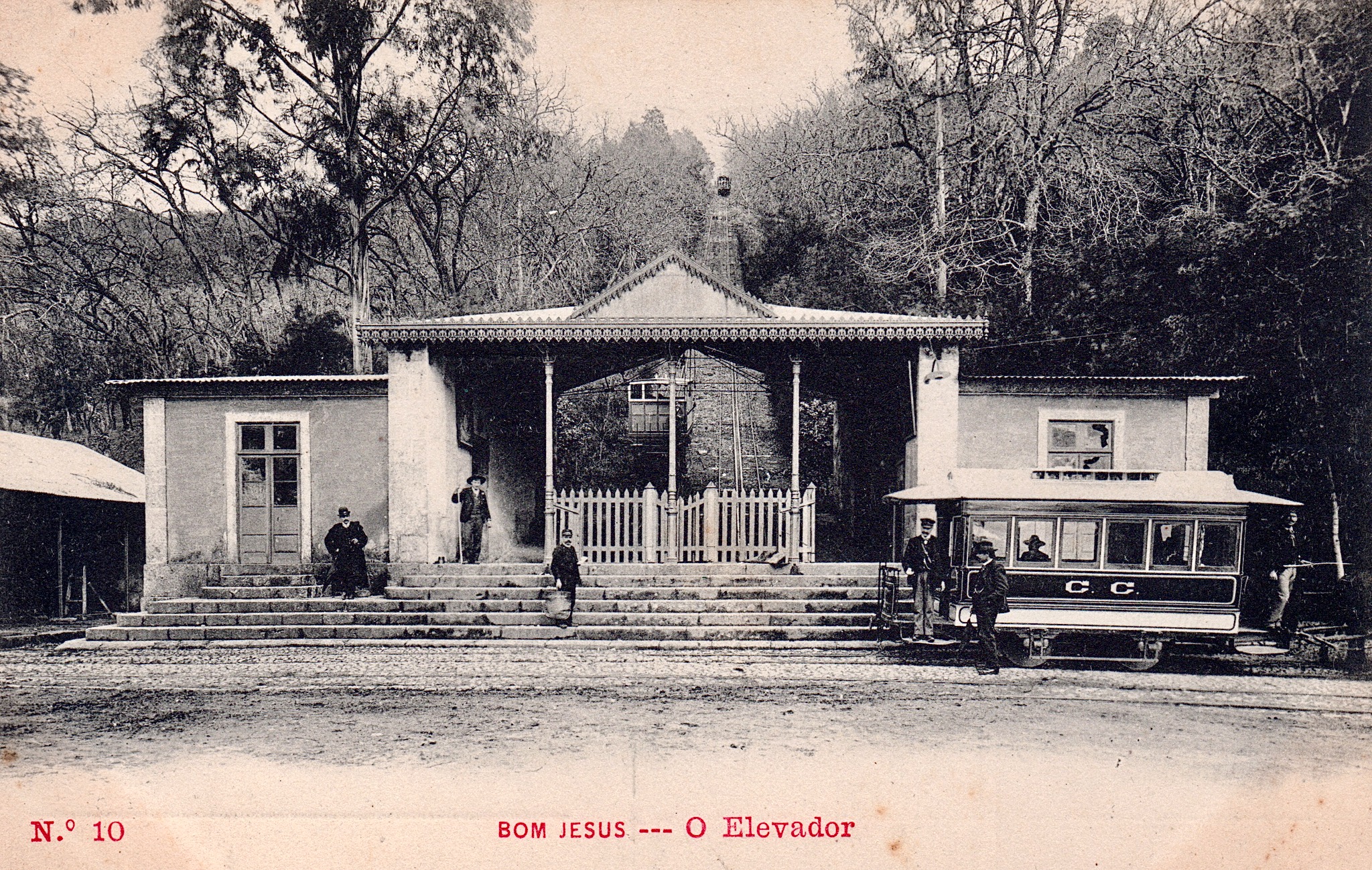 In May 1913 the municipality decided to take over and electrify the system. AEG and Thomson-Houston Iberica were contracted for the electrification. The 900 mm gauge was retained. A new depot was built south of the station. The power station was located on the same site as the new depot. Two boilers, two steam engines and two dynamos could deliver together 600 hp of electricity, which was not only used for the trams but also for electric street lights and pumps to supply water from the Rio Cávado to the town. All these operations became the responsibility of the Serviços Municipalizados de Braga (SMB).

In the night of 3 to 4 October 1914, just after midnight the first electric tram started test riding. On 14 October eight experienced tram-drivers from Porto went to Braga for training of the local drivers. On 18 October the official inauguration took place and electric services began on 19 October 1914. The trams were unique in Portugal in using bow collectors instead of trolley poles. 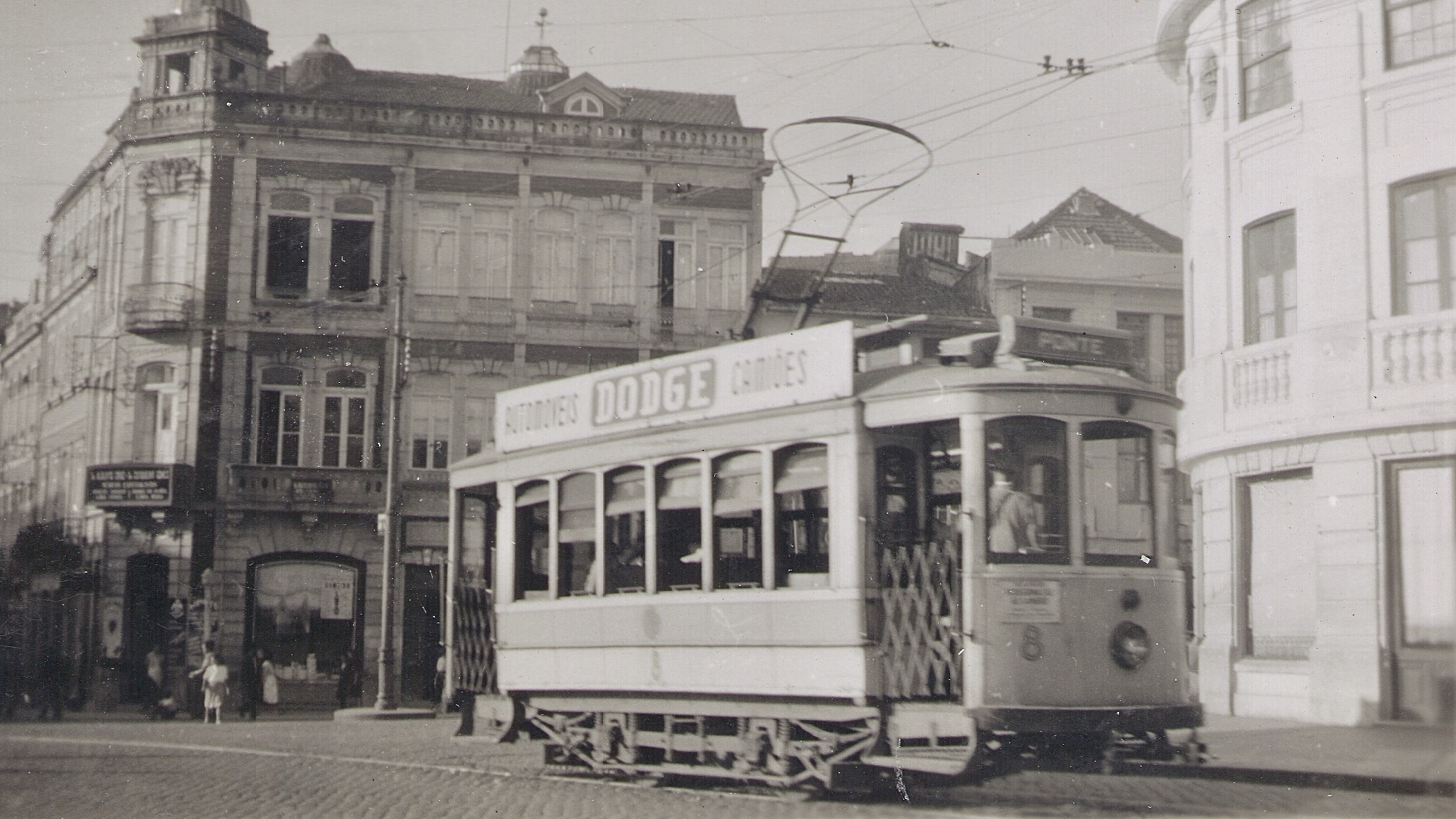 Tram no.8 on the way to Ponte

The system was single-track, with loops spaced to allow a ten-minute service. The three steam locomotives were disposed of, but the trailers were retained for use on Sundays and holidays and whenever pilgrimage traffic was heavy.

The basic time-table of 1914 showed trams every 20 minutes in both directions via Rua do Souto and via Campo da Vinha, resulting in every 10 minutes a tram until Peões. The trams continued every 30 minutes from Peões to Bom Jesus. On Sundays and days of pilgrimage with heavy traffic to the church, there were separate services between the station and the Avenida Central and the Avenida Central and Bom Jesus.​ 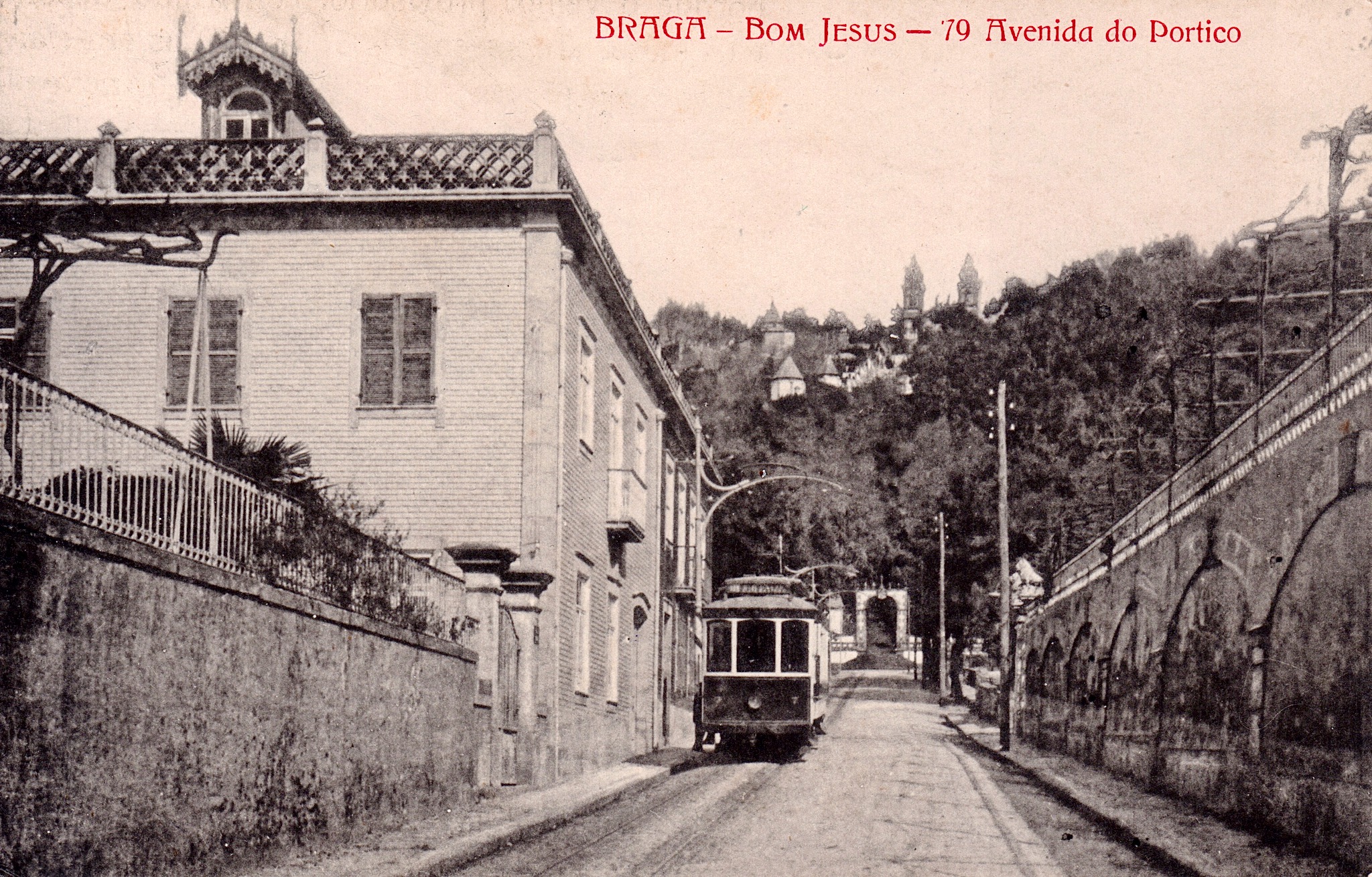 Tram no.7 on the Avenida do Portico with in the background on the hill the Bom Jesus church.

On Sunday 20 May 1923 the most severe accident in the history of the Braga tram happened in Tenões, between Bom Jesus and the Ponte de Santa Cruz, a section of the route with a gradient of about 6.5% over about 1.5 km. Motorcar 10 with an open trailer, both overcrowded, was on the way from Bom Jesus back to the city when the brakes failed. As the speed became far too high, the trailer derailed, hit a post of the overhead and then smashed into a wall with disastrous results. Eight people died and dozens were wounded. The open trailer was almost completely destroyed. 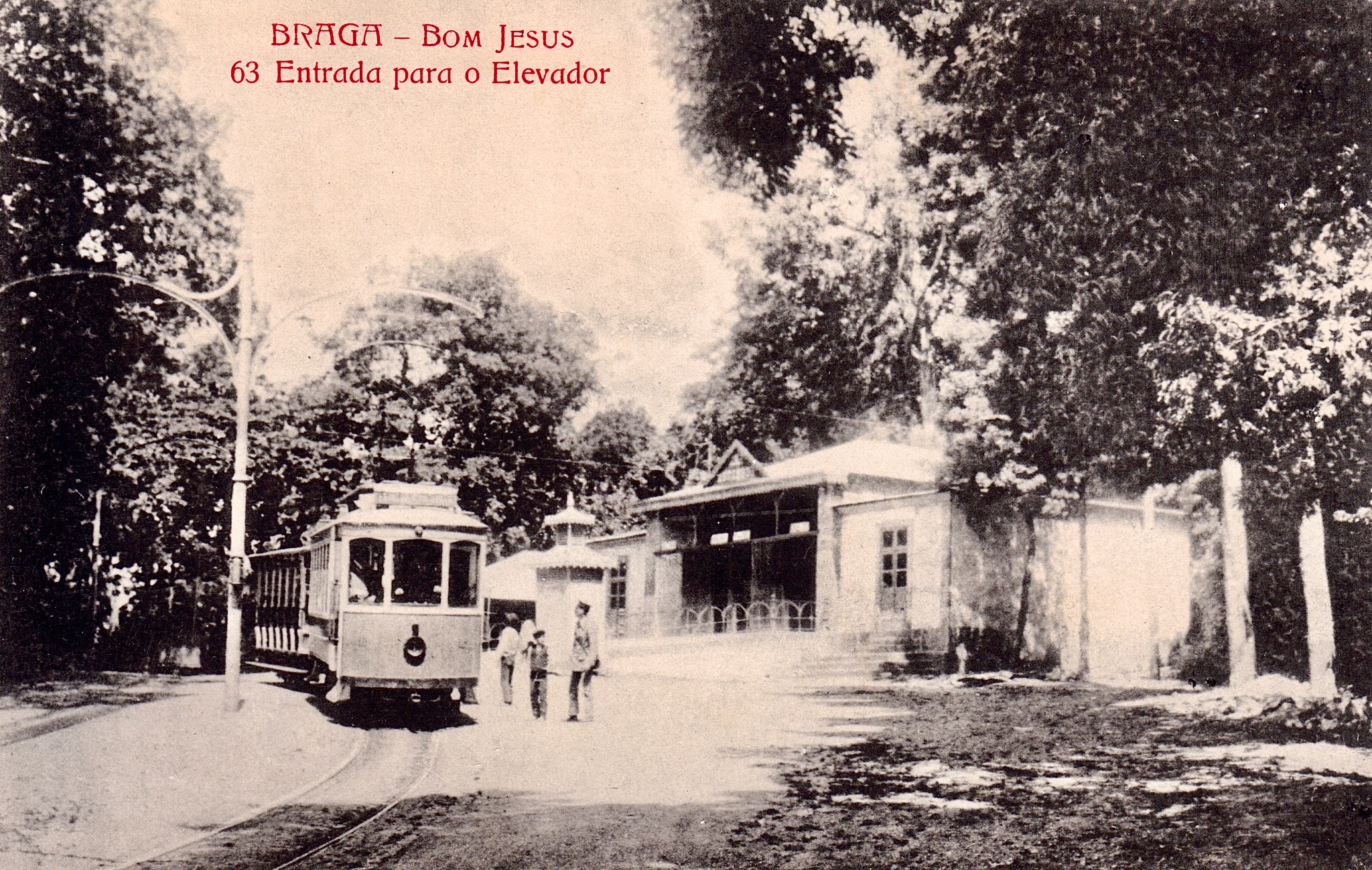 Tram no.10 with an open trailer at the lower station of the Bom Jesus funicular.

The most important extension of the Braga tramways was a line Largo da Ponte – Monte de Arcos, intersecting the main route at Praça de Republica. The construction of this line started in September 1921. Problems with the acquiring of the necessary materials caused that the construction took almost two years and the line could only be opened on 30 June 1923. Four years later, on 19 June 1927 this line was extended at the southern end over the bridge to the entrance of the Parque da empresa e do Clube de Caçadores.

Another extension was beyond the depot to the suburb of Maximinos, introducing a service Maximinos – Peões, on 7 July 1923. With these extensions the system reached its maximum size. No more changes were made to the network until its closure in 1963.

During the years the necessary maintenence was done to keep the trams running, but no renewial or modernisation was executed. Already in a report made in 1938, the director of the SMB described the tram system to be in a state of degradation. The director put in the report the question if the trams should be maintained or abandoned. As an option he proposed to replace the trams by trolleybuses. However at that moment no action was taken to address the issue. The trams and the tracks were just gradually wearing out more and more. In the 1950’s it became clear that to continue the tram operations major renewal of the infrastructure and complete replacement of the fleet was necessary. That wasn’t feasible though. Instead the trams were replaced with trolleybuses bought second hand from Heilbronn in Germany. The last service trams ran on 20 May 1963, and buses provided a service until trolleybus operation commenced on 28 May, on which day tram 2 made a brief farewell run from the railway station to the Porta Nova and back to the depot. 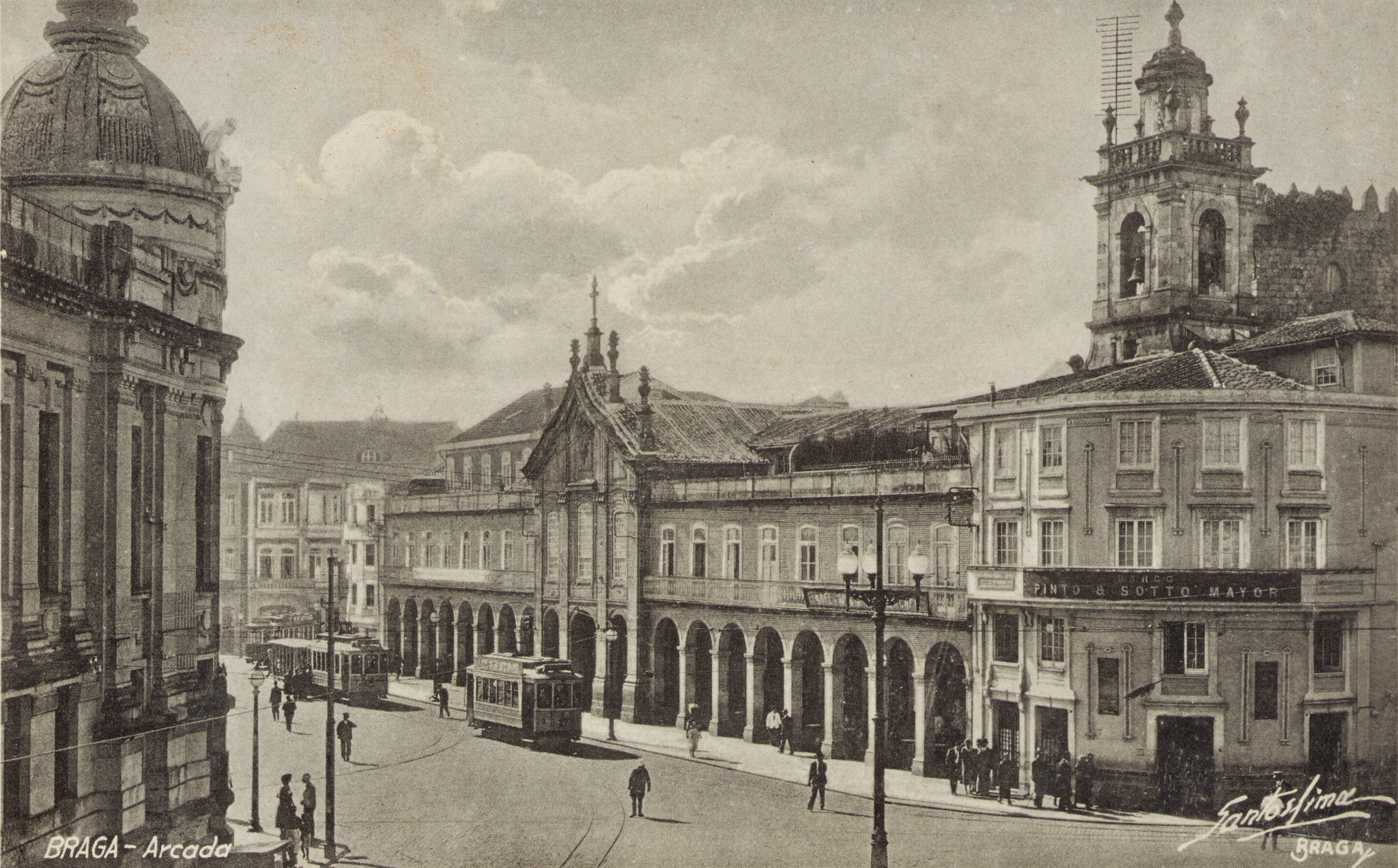 Arcada, about 1930. The destination of the first tram cannot be determined for sure, but is likely Monte de Arcos. Behind it a man is changing the points, which means that the tram with the trailer will go to Bom Jesus. A third, more dark coloured tram just comes from the direction of Rua do Souto.

Rolling Stock of the SMB

The Braga tram fleet comprised 11 electric motor cars, 13 trailers and two mail vans. The tram livery was originally light brownish yellow, then dark red, and finally most cars were painted yellow, but a few remained red until the end.

At the start of electric services in 1914, Braga had eight 20-seat semi-convertible four-wheel cars from the J. G. Brill Company of Philadelphia, similar to Coimbra 1-8 except for their 900 mm gauge and their bow collectors. These cars had six windows at each side and seats for 20: four rows in 2+1 configuration and longitudinal benches for two in each of the four corners. They were mounted on 1.98 m wheelbase Brill 21E trucks and were numbered from 1 to 8. Motors and controllers were by AEG, supplied by Thomson-Houston Iberica. 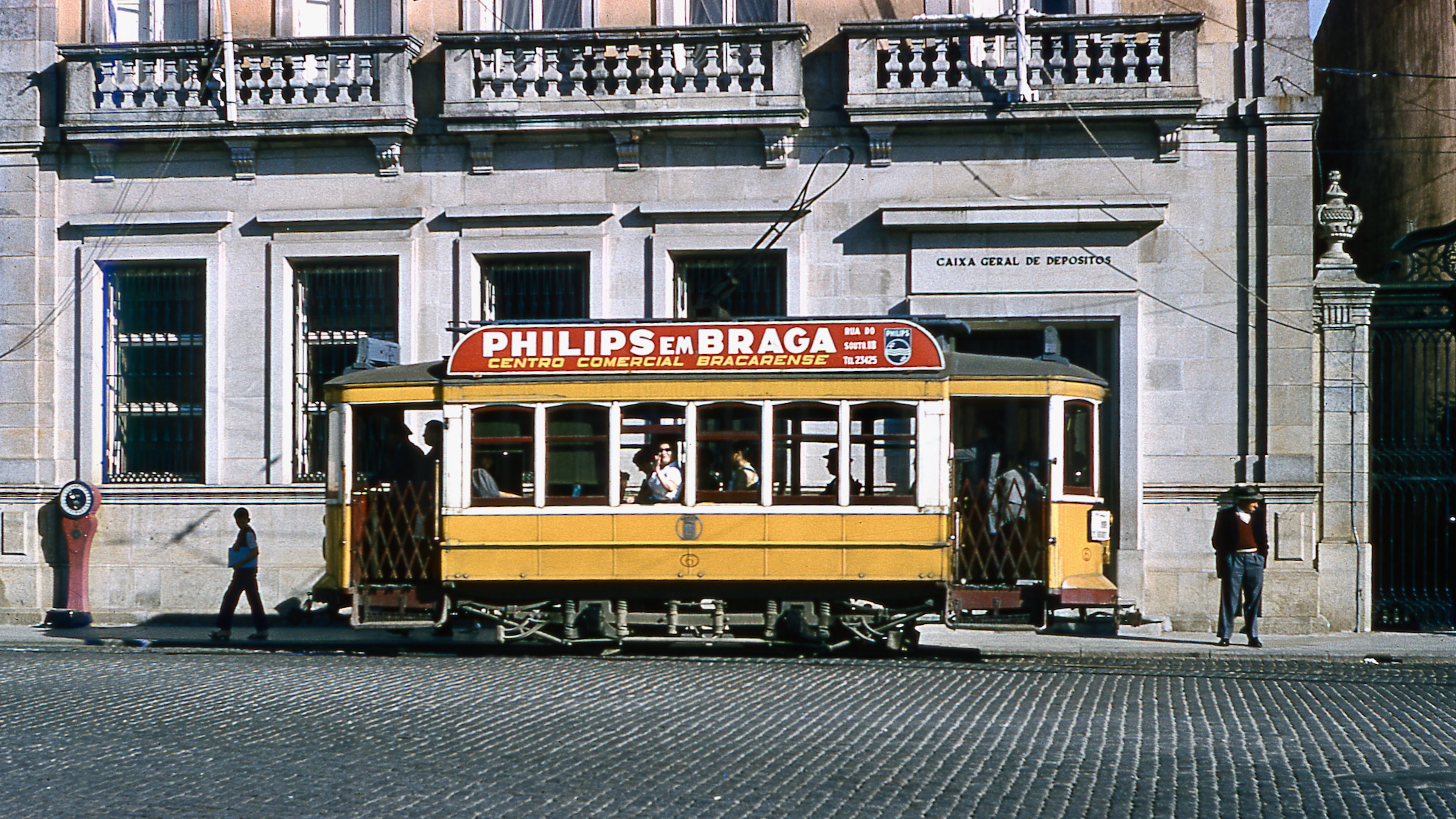 Likely in the early 1920’s and because of the network extensions of 1923, two more tramcars identical with 1-8 arrived, getting the numbers 9-10. The builder is not known, but no.10 was involved with the disaster of 20 May 1923, so they were built before that moment.

The last car added to the fleet (no.11) was built by the local workshops in 1936/1937 with the use of parts supplied by the CCFP in Porto. It was the Braga version of the Porto Brill-28 type with seven windows at each side and 28 seats with rows of 2+2. 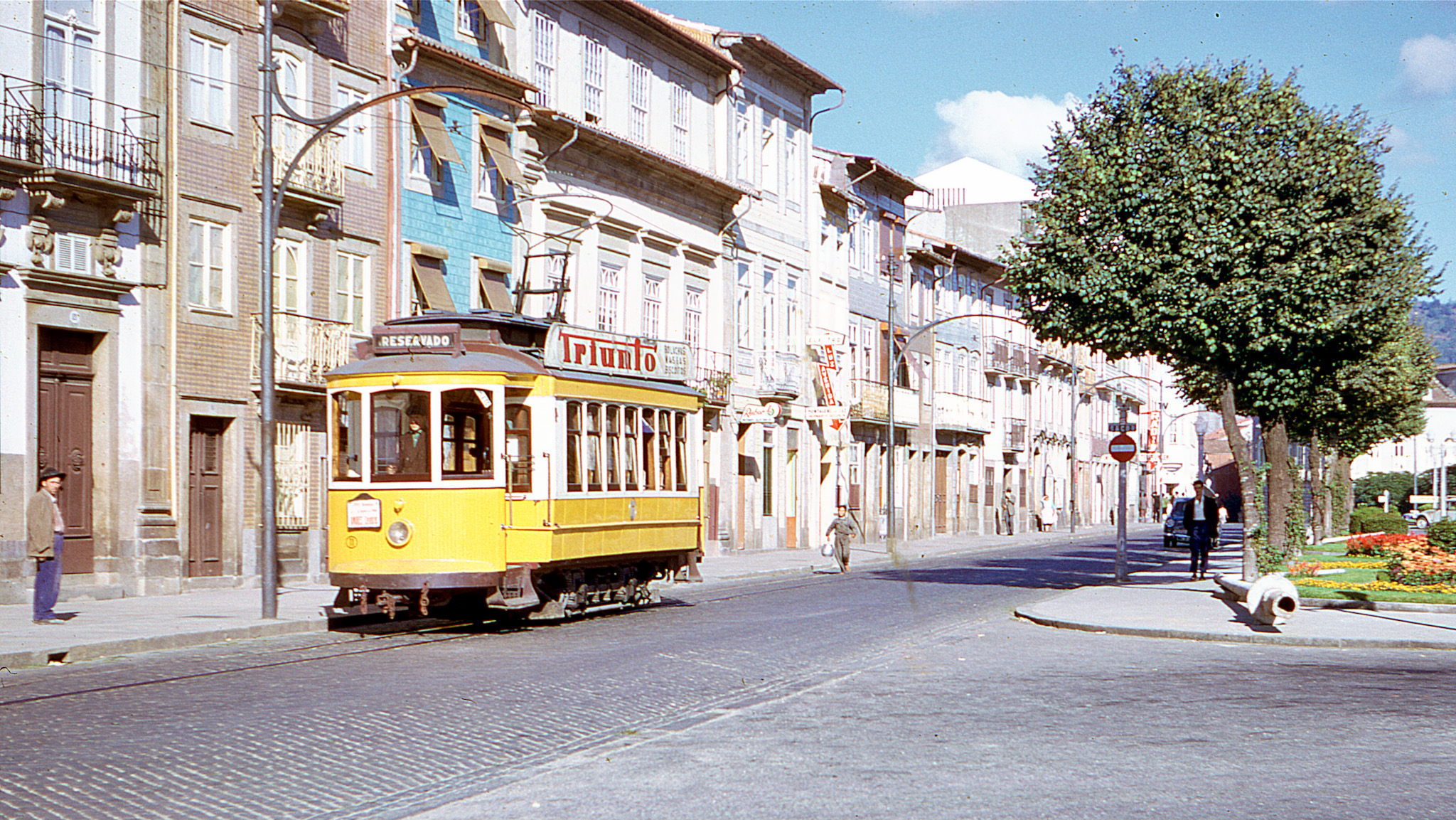 The origins of most of the mule trams / trailers are not known. The first were ordered in 1876 and came from a company based in Liverpool. Type and number of them are not known. Two open and two closed mule trams were ordered in January 1883 from Starbuck. The open cars were of the cross-bench type with five benches and seating for 20. The closed cars had a seating capacity for 12.

When the system was electrified, the 13 existing mule trams continued their life as trailers: seven two-axle cross bench cars (1-7) with flat roofs and with panelled and glazed bulkheads, four closed cars (8, 10, 12, 13) with six windows per side and turtle-back roofs, one saloon car (9) with a flat roof and with six drop-sash windows per side and one cross-bench car (11) with a turtle-back roof.

A tram with an open trailer series 1-7 on Praça da República. Postcard used in August 1936. 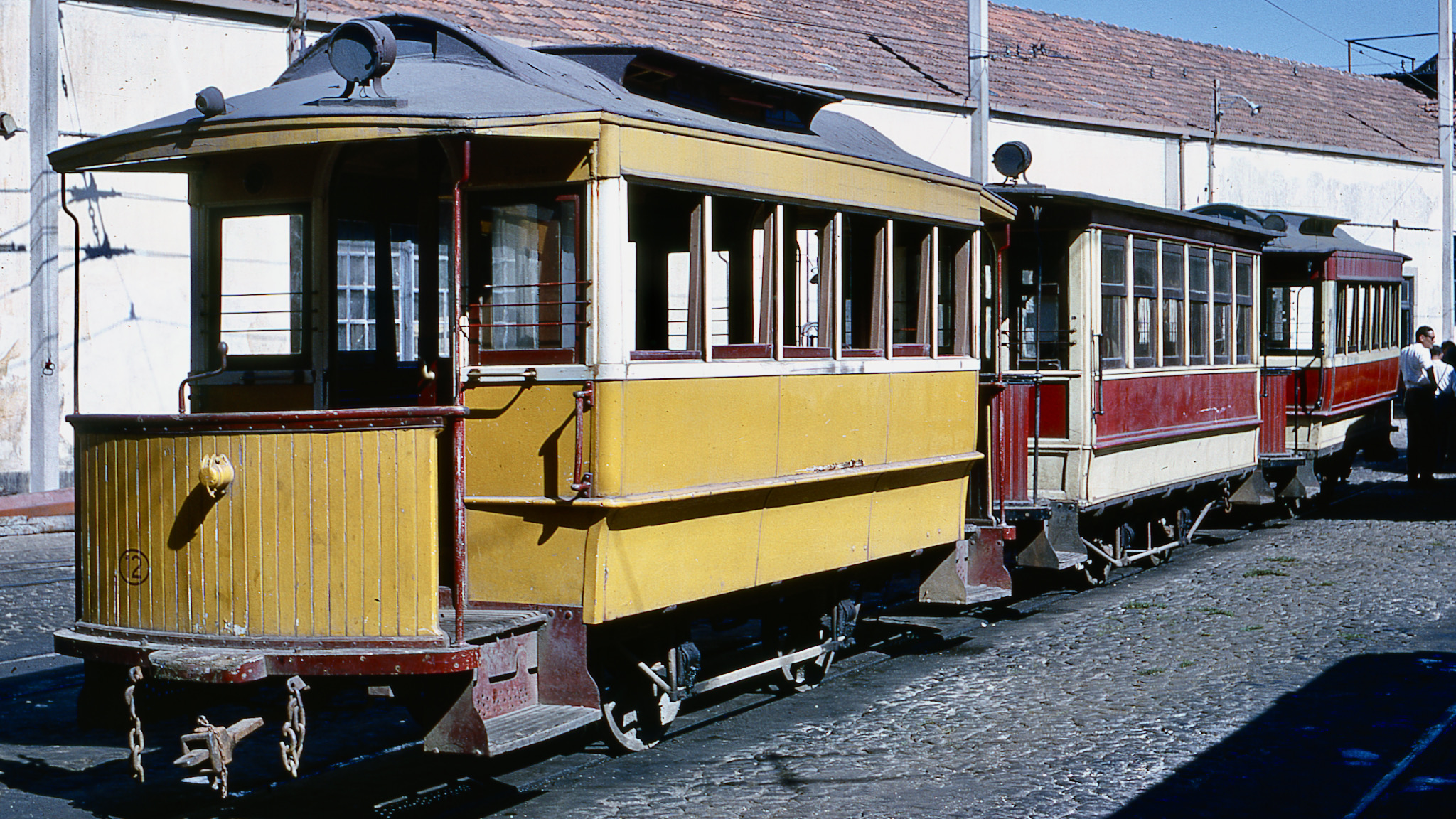 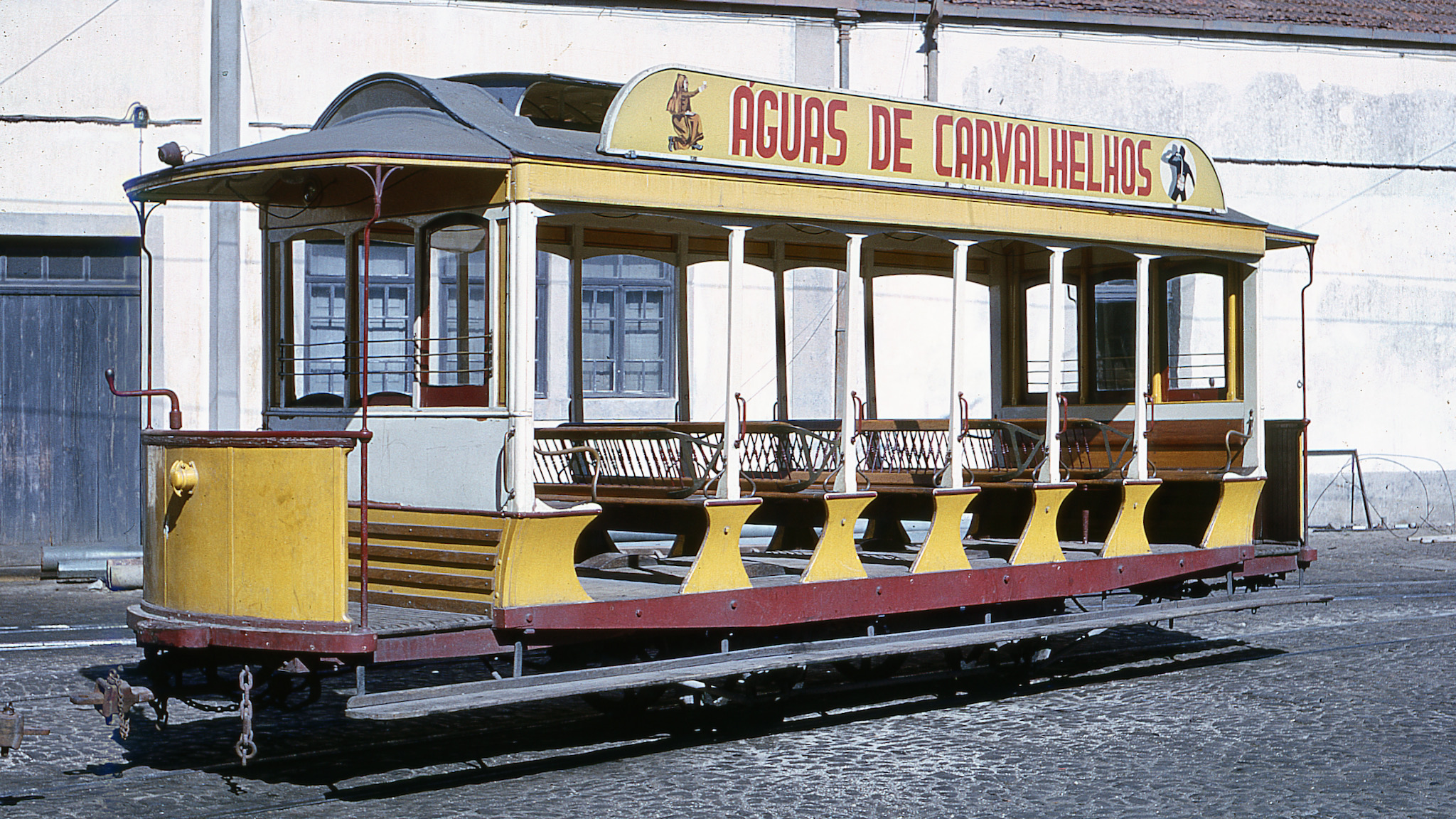 After closure of the system all cars were scrapped.