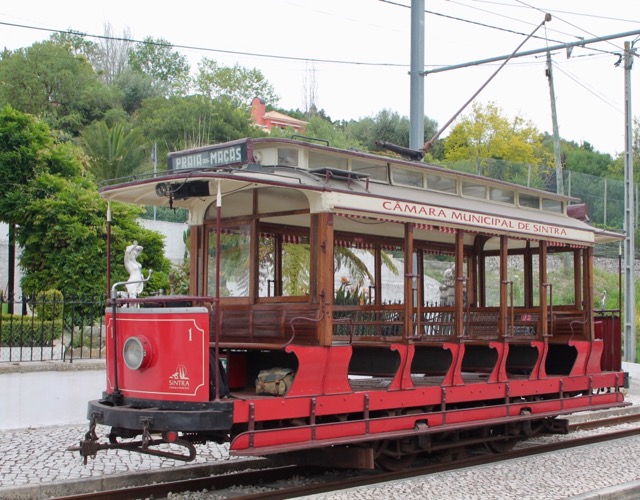 In 1904 an 11.7 km long metre gauge electric tramline was opened from Sintra (station) to Praia das Maças (Applebeach). An 1.0 km long urban line connected the station in Sintra-Estefânia with Sintra-Vila. Some freight transport existed, mainly between Banzão and the railway station. In the small Banzão depot is still a weigh bridge and the only track of the depot gives also access to the warehouse of a winery. At the railway station was a siding to make transfer of goods easy.

In 1930 the line was extended by 1.9 km from Praia das Maças to Azenhas do Mar bringing the total length of the system on 14.6 km. This last extension was closed again in 1954, the urban line was closed in 1958. From 1953 until 1974 the service was limited to Summer only. During the period 1975 to 2003 no service at all or only a very limited service on part of the line existed. Since the Summer of 2004 the line is almost reinstalled complete again between Sintra-Estefánia and Praia das Maças, except for the about 600 m long section through the town of Sintra until the railway station.

The time-table of the tram service is published on the site of the Câmara Municipal of Sintra. Sintra station around 1910. In front of the station building are a closed and an open motor tramcar.

Along the line are indications of distances. The current 0 km point is at Praia das Maças. With the description of the line these distances are used and that means the old Azenhas do Mar terminus gets its distance indicated as negative. The line is and was over its whole length single track with passing loops. Most was on reserved space or at the road side. Brill works photo of an open motorcar, still without electric equipment, and an open trailer. Brill works photo of the interior of a closed tramcar.

During the years reconstructions took place. Three new domed-roof bodies similar to the Lisbon “Standard” cars were constructed. Together with truck changes and renumbering this resulted in the following fleet:

In 2006 the Ribeira depot was rebuilt. Except for the fleet of Sintra, two more former Lisbon cars are stored there. One is 703, the other the 615 owned by a tram enthusiast. Also two former Coimbra trucks came to Sintra.

Sintra tram no.2 has just left the terminus of Praia das Maças, 15 September 2018. New Ribeira depot with closed tram no.4, the open trams nos 1 and 6 with behind no.1 just visible the yellow open tram no 7. At the right one of the open freighr wagons and behind it the overhead repair car. The people are a group of enthusiasts visiting the depot after they made a rental trip on the line. 4 September 2012.

More photos of the Sintra tram on Flickr.
Old pages about Portuguese trams.